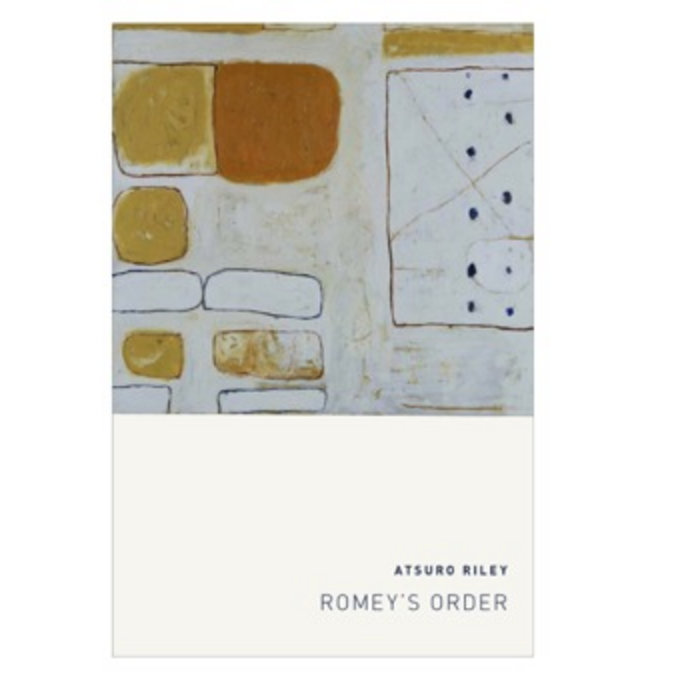 Atsuro Riley is the author of Romey's Order (University of Chicago Press, 2010) winner of the Whiting Award, the Kate Tufts Discovery Award, The Believer Poetry Award, the Witter Bynner Award from the Library of Congress, the Lannan Foundation Literary Fellowship, the Pushcart Prize, the Wood Prize from Poetry magazine, and an NEA fellowship.

His new book Heard-Hoard (University of Chicago Press, 2021) is the winner of the Alice Fay di Castagnola Award from the Poetry Society of America.

—LINK to THE BELIEVER MAGAZINE REVIEW, by Dominic Luxford:
www.believermag.com/issues/201010/

—LINK to "The Open Door: One Hundred Poems, One Hundred Years of POETRY Magazine" (Fall, 2012)—
press.uchicago.edu/ucp/books/book/chicago/O/bo13919067.html

REVIEW in the journal FREE VERSE, by Jon Thompson:
english.chass.ncsu.edu/freeverse/Archives/Winter_2010/reviews/RomeysOrder_AtsuroRiley.htm

Buy the Book from the Publisher:
press.uchicago.edu/ucp/books/book/chicago/R/bo8400655.html

"Atsuro Riley has an uncanny and unparalleled ability to blend lyric and narrative modes.  Close to the ear his poems sing with innovative – even experimental – vernacular.  His wildly original book, Romey’s Order, is set in the poet’s childhood 'blood-home,' the South Carolina lowcountry.  The style and language of the poems is fresh and inventive, thrillingly attentive to the intonations of speech, to the texture of sound and syllable as spoken and thought by the child narrator and his American father (a veteran) and his Japanese mother. There is darkness waiting in the wings of these poems, banished or held off, but felt nonetheless – the poverty, racism, the troubled father, but it’s all held at bay and instead we celebrate a child’s joy in life.  Words, for Mr. Riley, are as solid and real as any sight, sound, or smell called up from childhood, possessing a music and mystery even while being firmly rooted in a recognizable yet strange landscape 'where old pitch-pines and loblollies grow wild' "


"Atsuro Riley's astonishing and original debut collection, Romey's Order, thrives off its music. The poems are about the attempt to make sense of the world, to account for all the strange and disparate details that enthrall consciousness, and to hold them in some kind of right relation. . . There's a lot to marvel at here. . . The tension between the world of fact into which each of us is born and the desire to forge our own new worlds results here in beguiling music, a music that brings these poems alive, with all their sinew and subtlety."

The handcrafted poems of Romey's Order bear the mark of a fully developed, highly idiosyncratic sensibility--a sensibility that lends a from-out-of-nowhere quality to this collection, and that results in poems that are a pure delight to read. Riley's debut is a blast of fresh air for poetry, leaving one with the almost unsettling question: what would happen if his next collection outdid this one?

--The Believer magazine, May 2011 (The Believer Poetry Award citation)
(www.believermag.com/issues/201105/)


"Atsuro Riley's Romey's Order is a dazzling first book. . . among the year's best. . .The lexical fireworks power the narrative with physicality. The pleasures of Romey's Order are wondrous and manifold."


"One of the most exciting and distinctive debut collections in years . . the relation of language to the actual experience of perception is 100 percent pitch-perfect here."


"A stunning first book of poems. . . . Even read silently, Mr. Riley's delicious words roll and roil in the mouth."


"Originality is easier said than done. Most works of art, like most consumer goods, are versions or outright imitations. In contemporary poetry, even the so-called experimental often seems derivative and weighted with conventions. But when a new book of poems is as different from precedents as Atsuro Riley's Romey's Order, readers should take special notice."


"Atsuro Riley's Romey's Order is a first book with rare, powerful distinction--experimental in its forms and syntax, yet familiar as an old-time fiddle for its Appalachian twang, landscape, and imagery."


"Atsuro Riley's strange, beautiful and unsettling debut is like nothing else you will read this year."


"Atsuro Riley’s percussive poetry is heavily sound-driven. Riley is a collector, bricoleur and inventor of vocabulary, much of it gleaned from the speech, sounds and images of the rural South of his childhood; he has learned, as he writes in ‘Strand’, to “hammer, wire, and jerry homely words”. Hyphens nail together compounds. . . and sound associations are as vital a driving force in his poems as semantics and syntax. Though rich in sound and texture, his poems are also lean and taut: the language-play Riley so obviously delights in is neither florid nor self-indulgent but rather energetic and fizzling, and he is capable of vivid evocations of landscape, story and memory in even the most concise of poems."